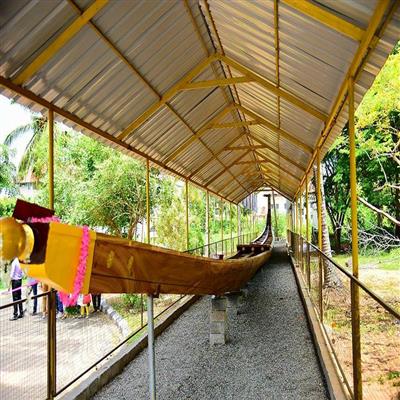 Aries Guinness Chundan, longest steel-made snake boat in Kerala, is all set to enthrall tourists once again. 143.25 feet long Aries Guinness Chundan, built at a cost of Rs 15 lakh in 2006, is reincarnating as a major attraction under the aegis of Indywood Film Tourism, a novel concept to brand India in global tourism map by blending the immense potential of entertainment and tourism.

The eleven-year-old Aries Guinness Chundan, one of the flagship projects from Aries Marine and Engineering Services, stormed into the Guinness Book of World Records for carrying 141 rowers and being the longest, fastest, safest and cheapest ever snake boat made of steel. It was featured in the Limca Book of World Records and Asian Book of Records as the longest steel made snake boat.

The entry of Aries Guinness Chundan became a turning point in the history of Kerala Tourism and it could have set new benchmarks in snake boat construction and race if it was not officially banned from taking part in Nehru Trophy Boat Race due to some cheap political reasons eleven years back irrespective of getting full support from High Court.  Aries Group also has the credit of launching Safe Botel, first of its kind, the unsinkable houseboat in India. This partially solar powered steel houseboat with eco-friendly features played an instrumental role in framing very strict norms for boats operating in the back waters of Kerala especially emphasizing the safety of the passengers.

He added that the snake boat was launched surpassing lot of hurdles including lack of local infrastructure facilities at Punnamada, raw materials, trained manpower and approvals "We faced lot of hurdles during construction. But determination, dedication and unity of our team led by traditional Thachan (carpenter) Babu helped to launch the boat with unique features in record time."

Another highlight is ladies can enter this snake boat. Normally ladies are not allowed in traditional snake boats as per Thachan Sastra.  "But lot of foreigners including ladies used Aries Guinness Chundan for the first time to experience the beauty of sailing in snake boat and to explore exotic locations in Alappuzha. Currently we are trying to build 4 same size steel snake boats to conduct weekly and annual league races promoted by various corporate brands for the promotion of Indian Tourism," he said.